The residential community of Lake Sherwood is among the most popular destinations in the Conejo Valley for prospective homeowners due to its lake-view properties, consistently fantastic weather, and close proximity to the Sherwood Country Club. This unincorporated community is situated around the beautiful Lake Sherwood reservoir, which provides residents of the community with a great place to go swimming and fishing when the weather permits. Surrounding Lake Sherwood are thousands of acres worth of mountains, natural springs, and open space.

This luxury community is also well known for playing host to hundreds of luxury homes that are located all throughout the area, many of which are positioned right around the prestigious Sherwood Country Club. If you’re searching for a luxury home that also offers an ample amount of privacy and security, Lake Sherwood is comprised of three separate electronic-gated neighborhoods. The most popular locations for prospective homeowners in Lake Sherwood include the homes around the lake and the homes nearby the two golf courses (the Sherwood Country Club and the Sherwood Lake Club), all of which offer spectacular views.

If you find that you’re interested in Lake Sherwood and all that it has to offer, the following provides a detailed and comprehensive look into the history of Lake Sherwood as well as what made it such a popular destination for prospective homeowners.

The Beginnings of Lake Sherwood

The unincorporated community of Lake Sherwood has a lengthy and interesting history, which began when the area was inhabited by the Chumash Indians for hundreds of years. The Chumash Indians called much of the Conejo Valley home for this lengthy period of time, during which they existed as hunters, gatherers, and anglers. This only changed in the latter years of the 18th century with the arrival of the Spanish missions throughout most of California.

It was at this time that the areas now known as Lake Sherwood and Hidden Valley were named Portrero Valley. In the years since, there have been many ownership changes that eventually transformed the area into the luxury residential community that it is today.

Ownership Changes Throughout the Years

In order to fully grasp how much the area of Lake Sherwood has evolved over the years, it’s important to take a look at the numerous changes in ownership that has occurred since the Spanish missions arrived in the late 18th century.

The first ownership change took place following California becoming a state back in 1850. Once this occurred, a land commission was formed in order to identify who officially owned certain land grants throughout California, which included the area of Lake Sherwood. The Portrero Valley that consisted of the area that is now Lake Sherwood was sold as part of the larger Rancho El Conejo to Howard Mills and John Edwards in 1872.

The portion of the Rancho El Conejo that consisted of Portreo Valley was given to Howard Mills, part of which was later sold to Joseph and Isabell McLaren Howard in 1875. They held onto the land for more than a decade before eventually selling it to the Banning Company in 1888. This land remained in the possession of the Banning Company for close to eight years before being sold to W.H. Matthiessen.

It was Matthiessen who began to finally make some developments in the area of Lake Sherwood around the turn of the century. In 1904, he created a sizable 45-foot dam that led to the creation of Portero Lake, which is now known as Lake Sherwood.

As the years went on, the area of Lake Sherwood became popular as a destination for the filming of movies during the 1920’s and for decades afterwards. The land held by Matthiessen eventually went to his son and his son’s wife, Elsie. When they divorced in 1925, half of the land was given to Elsie. She became married again a few years later to a man named James Canterbury, after which the lake was named Canterbury Lake for a short while. Once the stock market crashed, the property was sold to William Randolph Hearst.

After Hearst acquired the land, it was opened up for the filming of many more films and TV shows. The land remained in his possession until 1963 when it was bought by Dayton Realty. Dayton was looking to rezone the land in order to develop upwards of 1,400 homes and properties for commercial use.

While the local residents fought against this plan until it was formally denied by the Ventura County Board of Supervisors, Dayton Realty ended up draining the lake in 1983 for supposed testing of the dam, after which they never refilled it. Because they didn’t refill the lake as necessary, substantial amounts of damage occurred within the local ecosystem. The lake bed as well as the properties surrounding it were purchased by billionaire David Murdock in 1985, shortly after which torrential rain swept through the area and filled up some of the lake.

Lake Sherwood and the Film Industry

Lake Sherwood has a surprisingly lengthy history with the film industry, which is understandable given the beautiful location of this community in Southern California. Before Lake Sherwood was ever developed into a community consisting of hundreds of homes and a couple of golf clubs, it was the setting for a large selection of movies and television shows, the first of which was the 1922 Robin Hood film that starred Douglas Fairbanks.

The area surrounding the lake was transformed for a short period of time into the royal Sherwood Forest, a famous location in England that was associated with the legend of Robin Hood. The name of Lake Sherwood was chosen because of the area’s links to this film.

While the filming of Robin Hood was the primary link to the film industry that Lake Sherwood had in the 1920’s, the location was opened up yet again to the film industry once ownership of the land was obtained by William Randolph Hearst in 1929. Less than nine years later, The Adventures of Robin Hood was filmed within the Lake Sherwood area. This film would become highly successful for Warner Brothers in the box office and with critics.

From 1930 until as recently as 2011, dozens of films were shot at this location, which includes popular movies like Butch Cassidy and the Sundance Kid and Star Trek: Insurrection. The popular Bridesmaids film was the most recent movie filmed in Lake Sherwood in 2011. The location was so popular as a shooting site that MGM Studios considered moving the entirety of its operations to Lake Sherwood and the surrounding areas. 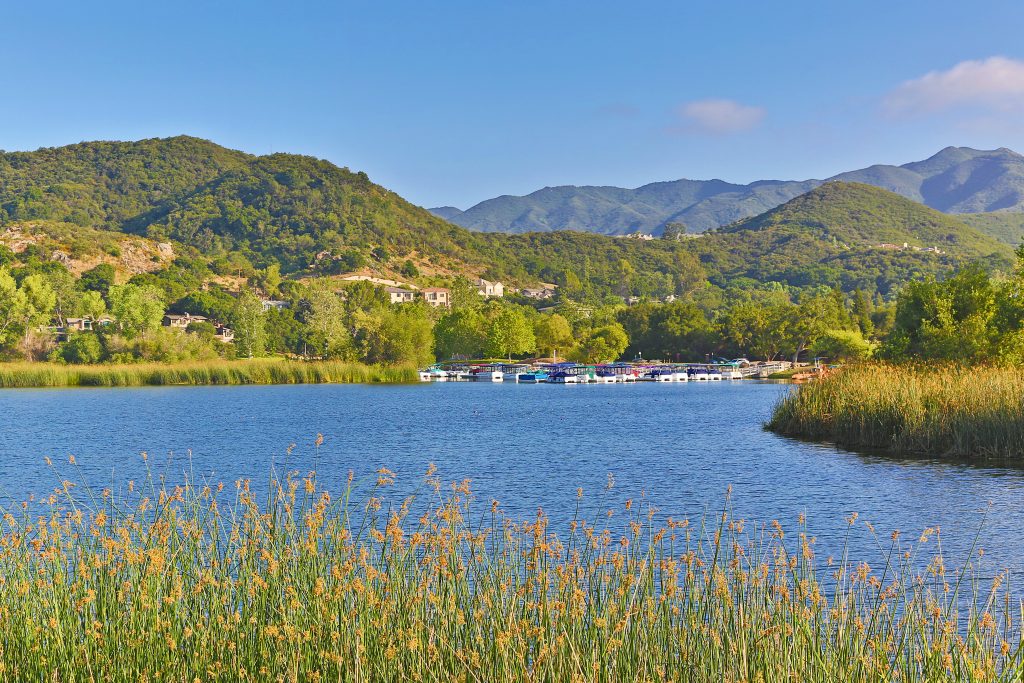 The Importance of the Lake

The Lake Sherwood community is notable because the homes and golf courses within the community surround the lake of the same name that’s situated at the very heart of Lake Sherwood. As touched upon previously, this lake was formed in the early 1900’s after the creation of the Sherwood Dam in 1904.

The dam itself is one of the oldest standing dams in all of California. Construction of the dam was led by W.H. Matthiessen during the short period when he owned the land that eventually became Lake Sherwood.

When the lake was drained in 1984 and not immediately refilled as it was SERPs to be, the local ecosystem was heavily damaged. However, the heavy rains that occurred over the next few years allowed the lake to slowly regain the wildlife that it once contained.

Today, this lake is as beautiful as it was before being drained and is considered by the community to be the ideal location for fishing, swimming, and all kinds of other outdoor activities. As the centerpiece of the Lake Sherwood community, this lake has always been important to the community. The lake-view homes in the area are the most sought-after properties throughout Lake Sherwood because of the spectacular views that they provide.

Damage and Recovery from the Woolsey Fire

The Woolsey Fire was a highly destructive fire that burned throughout much of the Ventura and Los Angeles counties in November of 2018. Throughout the entire areas that the fire reached, nearly 100,000 acres were burned, which resulted in the damage and destruction of over 1,600 structures. While the fire destroyed hundreds of structures, only a small number of these structures were located in Lake Sherwood. However, a sizable portion of land was scorched during the fire.

Because of how long the fire lasted, the residents of the Lake Sherwood community were on edge for many days because of the close proximity that the fire had to the community. Even after everything seemed to have calmed down and the fires were more than 40 percent contained, an unexpected flareup occurred in the canyons around Lake Sherwood, which caused damage to over 50 acres of land.

In just a short period of time, much of the damage that was caused by the Woolsey Fire in 2018 has been mitigated through extensive repairs and rebuilds of damaged properties, displaying how resilient the Lake Sherwood and surrounding Conejo Valley communities are.

The fascinating history of Lake Sherwood has played a large role in pushing the community towards the luxury residential community it has become over the past few decades. This thriving luxury community offers an ample amount of amenities to residents of the area, the primary of which include the two country clubs and the lake itself. The quality of the community as a whole is matched by the quality of the homes inside of the community, many of which offer sizable layouts, vast yards, and upscale features that make it a joy for its residents to call Lake Sherwood home.